Thanks to its altitude, one of the best views of the Rhein Main region can be enjoyed from Langenhain. This fact was also noticed by ancient Roman settlers who left behind a series of hillside graves dating back to 500 B.C.
The first historic reference to Langenhain was in 1309. The village was shaped by forestry and farming, and later by the leather making industry.
The town’s Protestant church was built in 1748 and is well worth visiting, as is the "Häuschen" (Little House) which houses the local history museum. The old part of town also features numerous half-timbered houses. Langenhain's newest and most prominent landmark is the Baha'i House of Worship, which was inaugurated in 1964 after seven years of construction. The temple’s striking architecture overlooks the Taunus Mountains and the Frankfurt skyline, and can be seen from far away.

Langenhain, which has a population of about 3,200, was incorporated into Hofheim in 1972. 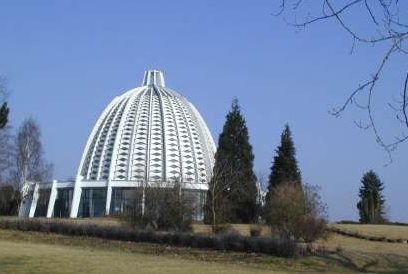